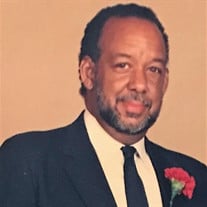 Robert Melvin Davis, Jr. was born June 26, 1944 in Newark, NJ, the oldest of three children born to Robert Melvin Davis, Sr. and Olivett Jeanette Wyatt. Robert grew up and attended schools in Wilmington, DE. Robert’s father passed away when Robert was 11 years old, which made him the “man of the house” taking special care of his dear mother and his two sisters; Sydella and Yvette. Robert joined the U.S. Air Force in 1966 and while stationed at Forbes AFB in Topeka, KS he met the love of his life, Louise. Robert invited God into his heart at an early age. He attended Community Presbyterian Church where he grew in the Lord under the stewardship of Rev. Maurice Moyer, founder of the church and community activist. God called Robert to preach and teach His Word while he was at Ninth Street Baptist Church in Lawrence, KS. He was ordained in 1977 under the leadership of Rev. Leo Barbee. After moving to Liberty, MO, God made Robert a steward over Second Baptist Church, Salisbury, MO. At Second Baptist, the church grew in attendance, baptizing, provided community resources and fulfilling the mission of the church. On December 31, 2000, Robert joined the loving membership of Mt Zion Baptist Church as an Associate Minister under the distinguished direction of Rev. C.L. Bachus. He often would say that Mt. Zion is more than church, its family! Mt Zion is such a sweet fellowship of God’s people! God gave Robert many gifts and talents which he followed with diligence and purpose. The gift of serving and helping people was evident throughout his life. He had a passion and urgency to mentor young people. He was the first teaching parent for the O’Connell Youth Ranch in Lawrence, KS. As a juvenile probation officer he was a recognized authority on child abuse and was instrumental in establishing the first county child abuse program in Lawrence. Robert was a policeman for 5 years during turbulent civil rights movements. He was elected to the Lawrence School Board for two terms. He served on a task force to recruit minority teachers and was liaison between the schools, police and community. Robert was an investigator for the Missouri Public Defender in Kansas City, capital punishment for 5 years. He also worked on discrimination through the Kansas Human Rights Commission and was an Investigator for the Office of Civil Rights Monitor, investigating workplace discrimination. Robert enjoyed cooking and was owner of ‘Them Bones BBQ’. He had his own signature BBQ sauce. Those who tasted his cuisine had a favorite, whether it is Chili, spaghetti, pork yak with noodles and so many more. It was common for family to ask him to bring their favorite dish to gatherings. Robert leaves family to cherish his life and memory: his beloved wife of 49 years, Louise; children: Pamela Davis, Joshua Davis, Liberty and Kimberley Davis in Pezenas, France; two sisters: Sydella Edwards of Wilmington, DE and Yvette Davis, Santa Fe, NM; one nephew, Howard (Angela) Boone; his adored granddaughters: Alyona Espinosa of Texas, Kyra Davis of Florida, Machaela Langley, Te`a and Anyah Davis of Missouri. They call him “Pop-Pop” and he gave each a nickname. Robert’s love and legacy will be cherished and remain with all his beloved family. Visitation with Family and Friends will begin at 9:30am, Wednesday, September 27, 2017 with Service at 11am both at Mt. Zion Baptist Church; 417 CL Bachus, KC, KS 66101. Interment immediately following at Leavenworth National. Fond memories and words of comfort may be shared at: www.CashattFamilyFuneralHome.com.

The family of Rev. Robert Melvin Davis Jr. created this Life Tributes page to make it easy to share your memories.

Send flowers to the Davis family.