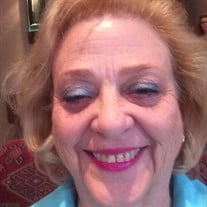 Nanette Marie Ragan, most beloved and cherished Mother, surrounded by her daughters, family and friends, went home to be with her Lord and Savior 1/13/2019. Nanette was born the youngest of three girls on 2/25/47 to Corene and Robert Plumberg, Nanette was often known as a fun loving tom-boy and she and her sisters suffered a great loss when their Mother passed away at a young age. Soon after, their Father moved the family to a Kansas City neighborhood where Nanette befriended a wonderful family, John A. and Ida L. Ragan & their children. She then met their son, John Lee Ragan when he came home on a naval leave, and the two fell into the love of a lifetime in which John Lee often said their love was so strong they were one. The couple married and had two children, Amy and then Jennifer. For a while, Nanette co-ran a successful ceramics class from the Ragan home with her mother-in-law, whom she absolutely adored and cherished. The family moved to a farm home in Excelsior Springs which began the happiest years of their lives. It was during this time one of their nephews, John W. Evers, moved in for a time and became like a son to the couple and they loved him dearly and spared him no amount of chores. Nanette was an immensely strong and loving woman who cherished her role as Mother and wife and was first and foremost a servant of God. She cherished her Bible and loved studying every aspect of God's word. She truly loved her family, friends and her little fur-babies and would want everyone to remember "Read Your Bible". She was preceded in death by her husband of 47 years, John Lee Ragan, her parents, her aunt, Lorene M. Roberson, sisters, Pam Almony and Ann Crowl, her beloved in-laws John & Ida Ragan, sister-in-law, Judy A. Bird and her niece Beki Huff. She is survived by her daughters Amy Ragan and Jennifer Ragan, sister-in-law Janice Dyer and husband Greg, brother-in-law, Lloyd Crowl, her nieces and nephews; John W. Evers and his wife Rosie and their children, Kelley Beckhelm and her children, Christopher Bird, Nicole Compton and her children, Joe Dyer and Jake Dyer, Lynetta Karlson and her family, Kimberly Almony-Poole and her family, Robert Almony Sr. and his family, Tamara Lane and her children, Anthony Almony, Angi Thornton and her family, Missy Crowl-Beason and her children, her two dear friends Gaylene Barker and Carol Gagliano and her friends at Pisgah Baptist Church. Memorial services will be held March 9th, 2019 at Pisgah Baptist Church in Excelsior Springs, Mo. Visitation will begin at noon, services at 1 p.m. with reception following. The family gives a very special thank you to Pastor Doug Richey, Pastor Gary Barkley, Lisa & Benny Oliver, Glenda Powell, Marian Barney, Janice & Greg Dyer, Gaylene Barker, Shawn Harmon, Alexa Summit, Jon Moore, Kip Provost and the numerous kind hearts who reached out to us not only on the day she left us but the days prior and after when we needed you so much. We also give thanks to Ryan Cashatt of Cashatt Family Funeral Home, St. Luke's Hospice House and the staff of Unit 64 KUMed Center.

Nanette Marie Ragan, most beloved and cherished Mother, surrounded by her daughters, family and friends, went home to be with her Lord and Savior 1/13/2019. Nanette was born the youngest of three girls on 2/25/47 to Corene and Robert Plumberg,... View Obituary & Service Information

The family of Nanette Marie Ragan created this Life Tributes page to make it easy to share your memories.

Send flowers to the Ragan family.