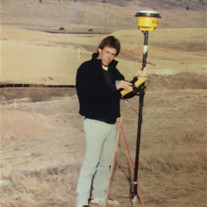 Michael Raymond Maddox peacefully passed away August 17, 2017. He was born August 28, 1964. Michael was born in North Kansas City hospital in the same room as his big sis. His doctors were Paul Revere and Daniel Boone, which was so fitting because Michael was an adventurer all of his life. Funny story about his name, he spent two weeks as Baby Boy Maddox before his parents decided on Michael Raymond Maddox. He lived most of his life in Kansas City area and enjoyed a short time in Colorado. Besides his family his first love was Civil Surveying. He started surveying in 1986. He would say there is no such thing, as right in surveying, it has to be perfect. In the industry he was known as the guy that would get it done perfect and faster then anyone else. There are too many buildings, intersections and bridges to count in the Kansas City area that he ensured were perfectly measured. All his life the foundation that he lived on was Robin, Michael and Stephanie the “Tripod” We all helped to make sure each leg was stable otherwise we would fall. If you had to only choose one word to describe him it would be kind. He always put others first. Nothing brought him more joy then anonymous acts of kindness. He would do anything for you and the smile he would have when talking about the little things he did for others was priceless. The impact he had in small little ways was something that meant a lot to him. One such example is that on his 50th birthday, we all went to dinner and unbeknownst to us he had paid for everyone prior to our arrival. He enjoyed being outside and watching the birds. He would put food out for the animals, especially in the winter, then sit on his patio and watch as they enjoyed the feast. Dogs were his favorite creatures on earth. He believed every dog deserved not just a big fat rib but a whole slab. Every time he would visit his sisters, their dogs would immediately go for his pockets knowing there would be a treat inside. He was always a practical joker. A great example is a dinner with his sister and brother-in-law, Robin and Jim, where he paid the waitress to bring Jim a quarter size piece of meet and dime size vegetables, while everyone else at the table got regular size portions. His mom of course has many memories, but one special one is that she loved to watch him walk “when life was at his best, he had a certain stride that told you life was going good”. She enjoyed so much any meal he had prepared, for it would always be Michael style, with 5 star treatment. His dad looked up to Michael for his talent to fix or create anything. They enjoyed many a game of golf and went back and forth with who was better. When he thinks of Michael he thinks of someone that could do “anything”! Michael's uncle Dwayne reflects that when Michel got down on things in life he would often turn to doing something for others. This improved his attitude and was always uplifting to others. He was happy to do without himself in order to give to other people. This extended to folks on the street or fellow riders on a bus who were in need. He spent so many enjoyable moments with his Nannie, taking care of flowers, plants and her house. His goal was to make her grass look like a golf course. He believed that his grandma Ida made the worlds best apple pie and chicken legs and loved her dearly. He enjoyed hunting, fishing and camping with his “Pappaw” and Uncle Dwayne. When it comes to enjoying helping others, his uncle Dwayne was tops. He loved making his house not just the best but more. No matter the job, whether manual labor or installing guttering, he would do it with a sense of pride and gratitude at having a uncle and aunt so grand. He loved his great nieces and nephews beyond words. He enjoyed getting them gifts that no parent would ever buy. His favorite thing was doing things for them that their parents would say no to. The moment they walked in the door he was up fixing them chocolate milk that was more like chocolate with a little milk. He was preceded in death by, his brother-in-law Jim Atkins, step-father Dick Davolt, Maternal Grandfather Harold Dunsmore “Pappaw”, Maternal Grandmother Viola Dunsmore “Nannie”, Paternal Grandmother and Grandfather Ida Zumault, and Raymond Zumault, Paternal uncle Corky Maddox, cousin Tim Maddox and the beloved dogs Cameron and Lucille. He is survived by his father Larry Maddox, mother Bobbie Davolt, sister Robin Atkins, sister and brother-in-law Stephanie and Tim Kallas, Step-daughter Amber Lee Jordan and family, nephew and girlfriend Nick Kallas and Sapphire Filkins, niece and Spouse Ashley Kallas and Seth Crede, nephew and wife, Chris and Randee Kallas, great nieces and nephews Gracey, Josie and Bubba Crede, Sophiee and Jackson Kallas. Maternal uncle and aunt Dwayne and Sam Dunsmore, Paternal Uncles and Aunts; Al and Donna Maddox, Dale and Pat Maddox, Julie Harris, Debbie Maddox, Paternal cousins David and Deedee Maddox, Doug and Paula Maddox, Danny and Dianne, Duke and Michelle Maddox, Curt and Maury Maddox, Stacy and John Perrin, numerous second cousins and his canine family, Billie, Pierce, Rocky and River. A celebration of life will be held at the Ararat Shrine Temple on what would have been his 53rd birthday August 28th from 6-9 p.m. with an open mic from 7:00-8:00. Ararat Shrine Temple - 5100 Ararat Dr, Kansas City, MO 64129 In lieu of flowers memorial donations may be given to the K.C. Pet Project-- 4400 Raytown Road Kansas City, MO 64129 https://donate.kcpetproject.org/checkout/donation?eid=60382

Michael Raymond Maddox peacefully passed away August 17, 2017. He was born August 28, 1964. Michael was born in North Kansas City hospital in the same room as his big sis. His doctors were Paul Revere and Daniel Boone, which was so fitting... View Obituary & Service Information

The family of Michael Raymond Maddox created this Life Tributes page to make it easy to share your memories.

Send flowers to the Maddox family.