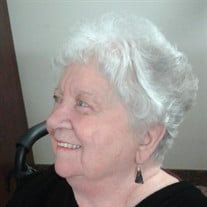 MARTHA "BONNIE" SHERBO Martha "Bonnie" Leonardi Sherbo, died February 1, 2017 at the Excelsior Springs Nursing and Rehab in Excelsior Springs, MO at 91 years of age. She was preceded in death by her husband John Willard Sherbo, Sr., infant son Richard Joseph Sherbo, daughter, Barbara Smith, grandchildren Aaron Nelson, Elizabeth Sherbo, and Olivia Schwartz, siblings Lillian Love, Cleo Parsons, Cecil Leonard, Jerry Leonardi, and James Leonardi. Bonnie was born on September 6, 1925 near Commerce, Iowa to Frank Leonardi and Susie Denton Leonardi and lived her childhood in the West Des Moines, Iowa area. She married John Willard Sherbo on October 3, 1943. They had been married 56 years when John died December 16, 1999. The early years of their marriage were in Florida during the war years while John served in the military. Later they settled in the Kansas City area and raised their children. Bonnie worked many years in market research in the Kansas City area. John and Bonnie enjoyed traveling and visiting with family and friends. Bonnie was well known as a wonderful cook and her dinners were coveted by family and friends. Her Italian spaghetti and meatballs recipe has been passed down for generations. Every Christmas Bonnie baked many loaves of Kolachi bread. This bread reflected the Sherbo Czechoslovakian heritage. The bread disappeared fast, but one loaf was specifically reserved for Christmas morning. Bonnie's favorite game of cards was, OH, HELL. She was a ferocious competitor. Before her eyesight failed she loved to read. She would read the daily paper from cover to cover and then start on the puzzle page. Her personality was one of a kind. She was a most lovable character. Her favorite greeting was, "Hey, I got a joke for you". There was no one like her. She was a quick wit, with a magnetic personality. She was not afraid to express her opinion in politics or anything else. She valued education and was proud of the fact that her children went to college. She was a thoroughly altruistic person, always unselfishly putting her children first and making sure others were taken care of before herself. She was loved by all who knew her. She welcomed all to her home regardless of race, color, or creed. Bonnie was the mother of 8 children: Barbara Smith (deceased) (Warner) Smith of Gladstone; John Willard Sherbo, Jr. (Jacqueline) of Kansas City, MO; Kathy (Charlie, deceased) Nelson of Marshfield, MO; Paul (Judy) Sherbo of Sherwood, Oregon; Karl (Kathi) Sherbo of Liberty, MO; Mark (Julie) Sherbo of Gladstone, MO, Susan (Tony) Satur of Saipan; and Richard Joseph Sherbo(deceased). She had 18 grandchildren: Shelley Kovac, Cheryl(Ron)Haines, Michelle Schwartz, Chris (Deanna) Nelson, Jeff (Lonna) Nelson, Ryan (Kelly) Nelson, Emily Nelson, Aaron Nelson (deceased), Alison Sherbo, Kate Sherbo, Elizabeth Sherbo (deceased), Marisa Sherbo, Meagan (Brady) Ritter, Alanna Snitzer, Martha(Ignacio) Yiftheg, Neischangipi Satur, Ann Marie Satur, and Imma Litulumar. She had18 great-grandchildren: Jesse Kovac, Misti (Mike) Simone, Ronnie (Hayley) Haines, Amber Haines, Heather Haines, Alexandra Mellor, Olivia Schwartz (deceased), Jessica Nelson, Felicia (Jake) Manus, Dylan Nelson, Amber Nelson, Yeyshia Nelson, Brandon Curtis, Stella Ritter, Kira Snitzer, Ernesta Yiftheg, Profilio Yiftheg, Isabella Yiftheg, and 9 great-great-grandchildren: Michael Simone, Makayla Simone, Christian Malott, Logan Malott, Kayden Mallot, Evan Malott, Penelope Manus, Conner Walton, and Tanner Piatt. She was a member of St. Charles Catholic Church in Kansas City, MO. She will be missed by her family and friends. She has left a void in our lives but never will be forgotten. Bonnie will be cremated. The family will have a Celebration of Life at a later date. Donations may be made to Kansas City Hospice or charity of your choice.

The family of Martha Bonnie Sherbo created this Life Tributes page to make it easy to share your memories.

Send flowers to the Sherbo family.