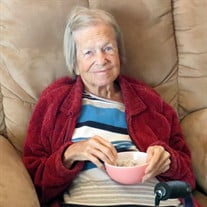 Lois V. Kent aka Müt (pronounced MOO t - German slang for Mom) October 31, 1926–November 24, 2016 Lois was born on Halloween, 1926, in Peoria, IL and grew up in Galesburg, IL. Lois was the second child and first daughter of Louis and Mary Pappmeier. She had an older brother, Harold; a younger sister, Sue and a younger brother, Bill. They grew up together with rabbits, goats and a pet monkey. Lois graduated from Knox College with a degree in Psychology. Following graduation, her adventures continued as she joined a mountain climbing group. After meeting John Robert Kent (Pop to his family) on a blind date, Lois and “Bob” married in the spring of 1949. They moved to Kansas City, Missouri where they settled and remained throughout their lives. In 1950 their first child, Marilyn, was born followed by Sarah, Carol, David, Cindy, and Art. She led an interesting life punctuated with stories such as “Meat Pie with Soap Potatoes” and “Do you think this needs stitches?” Ask the kids and they can fill you in. Lois had her own method of dealing with the stress of six very active children. To deal with this stress she would instruct them to go run around the house or she would take a bath. Lois loved to read and on occasion, dinner would have to wait until there was an appropriate stopping place in her book. As the kids grew older and they moved out, Müt began the “Kent Family Sunday Dinner” tradition. This tradition was created with the thought that she would not see anyone unless she fed them (She may have been right). With the promise of good food, every Sunday dinner was hosted at Müt and Pop’s house for many years. As the numbers swelled with husbands, wives and grandchildren, and as Müt and Pop grew older, the kids took over and the tradition continues to this day. In 1969 Lois began a 20 + year career with the Community Blood Center where she worked with nurses and technicians in transporting blood and verifying labeling codes. Müt and Pop started traveling once all of their children had ventured out on their own. Together they visited 9 continents (we know there are only 7 but we wanted to make sure you were awake.) They visited all the continents except Asia and Antarctica. In the US, they traveled to many National Parks including Yellowstone, Bryce Canyon, and the Great Smokey Mountains. Two of the most elaborate trips they took together were to Australia and Egypt. They traveled throughout England, Scotland, Sweden, and Norway, and even traveled on a freighter above the Arctic Circle. If you notice, there is no mention of the kids in any of these travels, which is because they were never invited. Müt loved to watch the Olympics, work on the Kansas City Star’s daily crossword puzzle, enjoyed going to the annual Kansas City Renaissance Festival, and spent the kids’ inheritance on bird seed (lots of bird seed). This “Nutty Old Woman” was deeply loved and will be greatly missed! Lois was preceded in death by John R. Kent, husband; Marilyn Kent, daughter and Harold Pappmeier, brother. Lois is survived by Sarah (Charlie) Barr, daughter; Carol Kent, daughter; David (Teresa) Kent, son; Cindy (Bob) Maasen, daughter; Art (Lydia) Kent, son; Sue Childress, sister and Bill Pappmeier, brother. She is also survived by grandchildren Corrinne Barr, Meredith (Andrew) Cerrone, Lily (Chase) Ruble, Emily Maasen, Hannah Maasen, Zach Kent, Nathan Kent, Gage Kent and great-grandchildren Hazel and Sammy Cerrone. In lieu of flowers the family requests donations to the National Wildlife Federation or the Michael J. Fox Foundation for Parkinson’s Research. Funeral Service will be 2pm at Raphael Chapel, 5401 N. Sycamore Ave, Kansas City, MO 64119, with Visitation beginning at 1pm. Fond memories and words of comfort may be shared at www.CashattFamilyFuneralHome.com.

The family of Lois Virginia Kent created this Life Tributes page to make it easy to share your memories.

Send flowers to the Kent family.