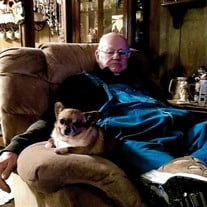 Jesse Dean Lynch, 91 of Liberty, Missouri passed away peacefully January 8, 2018. Jesse was born November 2, 1927 to Paulie and Hazel (Peters) Lynch in Harris, Missouri. Jesse graduated from High School in Harris, Missouri. He was a veteran of the US Army with an honorable discharge February 12, 1948. He married Susan Tayor April 1, 1961 and to this union three children were born: Peggy, Gary and Douglas. Jesse worked for Allis Chalmers, and KW Dart. He enjoyed hunting, fishing, CB Radios, watching the Missouri River and enjoying nature, but above all, he loved, cared, and provided for his beloved family. He is preceded in death by his parents; Paulie and Hazel Lynch, one half brother, Merril “Vic” Lynch. He is loved and remembered by his beloved wife, Susan, Children; Peggy (Joe) Bringus, Gary (Lori) Lynch and Douglas (Robin) Lynch; 12 Grandchildren and 8 Great-Grandchildren. Burial with full Military Honors will be 2:30 P.M., Friday, February 8, 2019.

The family of Jesse Dean Lynch created this Life Tributes page to make it easy to share your memories.

Send flowers to the Lynch family.