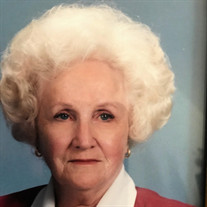 Helen Jean Roberts of Independence, MO, 90, passed away peacefully on April 7, 2017 following a brief illness. It was a beautiful sunny day, the birds were singing, there was a gentle breeze. She was born in Independence, MO on October 7, 1926 to Harry E. and Nettie Rice. After graduation she went to work as secretary to George Wallace, brother to Bess Wallace Truman, in the Waggoner-Gates Mill. In later years she would donate original cookbooks from the mill and help guides at the Bingham-Waggoner mansion identify pictures. She was married in 1950 to Myron L. Roberts and they would live in Rapid City, SD where he served in the Air Force. They would be married 45 years until his passing in 1995. She was predeceased by her parents, husband, and a son, Gary in 2013. Survived by daughter, Denise and rescue pup, Lily of Independence, MO. Returning to MO in 1952, she worked as an executive secretary at the Vendo Company, maker of soda vending machines. Her voice was chosen to be used in voice-activated vending machines at a Worlds Fair. She would go on to work at Allied Signal, later known as Honeywell, in Kansas City, MO where she would retire in 1994. She would care for both her parents and mother-in-law until their passing while working full-time and raising a young family. Her love and dedicated care was boundless. She was a member of the Raytown Christian Church. At age 71, she suffered a massive ruptured brain aneurysm and would undergo three extensive operations to save her life. In months of rehab, she would learn to walk, speak, read, write, do numbers, and tie her shoes all over again. Within a year, she was able to drive again. Thank you, Dr Jonathan Chilton of Research Hospital, for saving her life so that we would have these last 19 years together. She was an excellent cook and flower gardener. She was fond of all animals, Angels, the color blue, macaroni and cheese, pancakes, flowers, songbirds, Starbucks coffee, and Word puzzles. She enjoyed reading the Sunday paper, watching KMBC Channel 9, Good Morning America, Mr. Bean, the Ellen show, Jeopardy and marathon movie watching. She loved listening to The Bee Gees, Alan Jackson, Michael Buble, Richard Marx and especially cherished every Josh Groban song. And she loved our Heavenly Father. A special thank you to the incredible staff of Truman Gardens, Independence, MO for the sincere love and incredible care you gave her when she needed it the most. She loved and appreciated each and every one of you. And a heartfelt thank you to Ryan Cashatt, of Cashatt Family Funeral Home, for taking care of her final needs. There is no one I would have trusted more for her final care. Mom, I will forever see your smile in every sunrise, hear your voice in every birds song, and feel your love with every summer breeze. I love you dearly and miss you terribly. What a blessing to have you as my Mom. Rest In Peace, my precious angel. You are healed, you are home.

Helen Jean Roberts of Independence, MO, 90, passed away peacefully on April 7, 2017 following a brief illness. It was a beautiful sunny day, the birds were singing, there was a gentle breeze. She was born in Independence, MO on October 7,... View Obituary & Service Information

The family of Helen Jean Roberts created this Life Tributes page to make it easy to share your memories.

Send flowers to the Roberts family.