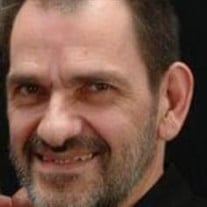 Gerardus Wilhemus Maria Remmers 64, passed away November 10th, 2018 at North Kansas City Hospital. Ger was born September 19, 1954 in Venlo, Netherlands to Gerardus Petrus Norbertus Remmers and Maria Hubertina Scherjon Remmers. Ger married his wife Paula in 2002 in the Netherlands and moved to Kansas City in 2006. Ger had many hobbies including computer engineering, networking and support groups. He loved reading, carpentry, woodworking, welding, music, Formula One racing and his cats. While in Kansas City, Ger began working with the City of Northmoor as a handyman and groundskeeper for the City park. Ger was preceded in death by his parents. His survivors include wife Paula of Kansas City, Sister Thea Wesselingh and Husband Michel of Maastricht, Netherlands, Brother Herman Remmers and Partner Marij of Venlo, Netherlands, Sister Els Van de Rijdt and husband Peter of Helden, Netherlands, and Brother Paul Remmers of Blerick, Netherlands. He has 2 nieces, Silvie and Marloes Van de Rijdt and 3 nephews, Bas, Gertian and Coen Wesselingh as well as Great-nieces and nephews all in the Netherlands, a Stepdaughter Heather Beagley of Kansas city, a Stepson Phillip Beagley of Kansas city and 2 granddaughters Anna and Megan Beagley of Kansas city. Ger will be cremated and the family will have a celebration of life at a later date.

The family of Gerardus Wilhemus Maria Remmers created this Life Tributes page to make it easy to share your memories.

Send flowers to the Remmers family.