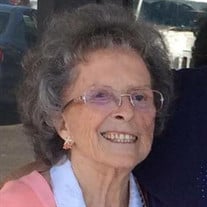 Freida (Ward) Woodroof August 9, 1928 – September 25, 2018 Freida Mae Nicholson – Ward – Woodroof, Kansas City, Missouri, took her first steps in her new adventure Tuesday, September 25, 2018. After blessing this earth with her presence for 90 years, she crossed over with her family by her side at North Kansas City Hospital. Freida was the second-born and oldest daughter of 12 children born to Gene and Cecile Nicholson in Maize, Kansas on August 9, 1928. Growing up and living on the family farm, she knew and understood the value of hard work, family, and tending to the little brothers and sisters that she loved as her own. Her caretaking nature and imaginative outlook made her a favorite sister and aunt among her “Nicholson Clan”. As the oldest sister of 12, her return visits to the farm were greeted with the same joy and expectation of Christmas morning. By the time she became a Mama herself and had moved away to the “big city”, her return to the farmhouse in Maize was greeted with the glee and giggles of “Freidie and Frank’s here!” As the family grew and the Thanksgiving gatherings multiplied, there were plenty of babies to cuddle and plenty of babies to love. “Freidie” was at home in the home. In October 1945, she married Frank Roeland Ward and began her own family, settling eventually in Kearney, Mo. In that union, she and Frank had three children, Terry Eugene, Diana Lynn, and Jerry Lee. Lifelong friendships were forged, and her creative talents sought outlets. She was a member of the Arley Methodist Church, and later what is now known as Unity Kansas City North, where her angelic singing voice graced the cathedral sanctuary. Two of her three children were married at the church under the pastoral of Rev. Dr. Hilbert. It was out of her home in Arley where she began her wallpaper and painting business in the 1960s, Ward’s Decorating Services. All 4’10” of her tiny frame carried, carted, lugged and hauled ladders, walking planks and wallpaper pasting tables to customers near and far. Her meticulous care and “whistle-while-you-work” attitude gained her respect and admiration as a sought-after professional. Her love for making things beautiful again lead to her specialty of whole house renovations. As her children attended Kearney High School in the early to mid-60s, the little brick ranch outside Arley became the second home for many teenagers, and the first holiday home for many of her grandchildren. With a full blackberry patch, white bark birch and blue spruce trees, and an apricot and apple tree orchard, the “farm” in Arley became the home of many wonderful memories where cookies were baked, lightning bugs were caught, and Christmases were magic. Freida’s professional career and change in life circumstances brought her to Northmoore in the mid-70s. As she wound down her career, watched her five grandchildren grow into adulthood, she came upon the love of her life and her last husband, John Woodroof. Freida and John built a life together from 1985 until John’s passing in 2008. Freida and John shared a love story of mutual respect and adoration. A veteran of WWII and a POW, John and Freida set their path in a deliberate, productive way. While sailing on Smithville Lake or the Missouri River, this First Mate found her Captain. Through different heartaches and tragedies, Freida lived her life to overcome and always reflect on her personal growth. With 90 years of caring, sharing and sacrifice, her life blessed countless others, providing life-changing opportunities for those she loved. Always ready with a hug, her presence never failed to brighten a room, her giggle always sparked a laugh, and her petite little frame stood as tall as a giant when she was giving of herself. Freida loved her home and her garden, working tirelessly to make them both beautiful. She was an accomplished cook and a wonderful artist, working primarily in watercolor. Those who have been fortunate enough to receive her Christmas cards cherish the work of her hands. Her closest friends in the final years met weekly at her home to discuss and share their spiritual journeys. Her 90th birthday party in August was hosted by the group, with a special memorial book printed and gifted to her. The spark that lived within her continues to shine upon all our lives. She was preceded in death by her parents; three brothers, Marvin (Marty) Nicholson, Robert (Bob) Nicholson, and Carl (Corky) Nicholson; three sisters, Donna Frazier, Linda Pennington, and Glenda Jean (Gigi) Nicholson; two sons, Terry Ward and Jerry Ward; one grandson Brian Lee Fritz; and two husbands, Frank Ward and John Woodroof. She is survived by her daughter, Diana Lynn Mena, two daughters in law, Norma (Terry) Ward and Julie (Jerry) Ward; one granddaughter Pauletta (Marty) Clariday; four grandsons, Christopher Ward, Benton (Lori) Fritz, J. Shane (Quy C Le) Ward and Judd (Kim) Ward; five great-grandsons, six great-granddaughters, and three great-great grandchildren. She is also survived by her brothers and sisters Charles (Chuck) Nicholson, John Nicholson, Nancy Grover, Connie Lee, and Jennie Baker-Radcliff, numerous nieces and nephews, and countless friends. Freida’s wishes were to be cremated and her ashes joined together with John’s. Arrangements by Cashatt Family Funeral Home. Family and friends are holding private celebrations of her life, in the home that she loved, with the people whom she loved, and the memories we all hold dear.

The family of Freida Mae Woodroof created this Life Tributes page to make it easy to share your memories.

Send flowers to the Woodroof family.