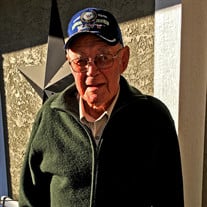 Fred Charles Clark, better known as Fritz, passed away at Delmar Gardens in Lenexa Kansas Sunday afternoon, December 3rd, 2017. Fritz reached the impressive age of 93 years. Before being moved to the Kansas City Metro area in, 2016 he resided in Wymore, Nebraska and prior to that lived in Rushville, Nebraska, with his wife Pat, from 1960 to 1989. Fritz was born September 8th, 1924 at home in Odell, NE to Fred Thomas and Clara Amelia (Thomas) Clark. Fritz was the youngest of four children and the only son. He grew up in Odell, NE where he attended grade school. He attended high school in Wymore, NE, graduating in 1942. Fritz joined the Navy right after graduation in June of 1942. When home on leave he married Patricia Lou Stoll on May 8th 1943 in Marysville, KS at the Christian Church parsonage. They spent the next 70 years together. Patricia Lou Clark passed December 6, 2013. Unto this union one son was born in 1951, Timothy Charles Clark. During World War II Fritz served on two Crater-class cargo ships that delivered troops, goods, equipment, and ammunition to locations in the war zone, the USS Lakewood Victory and the USS Allioth. Cargo ships were the lifeline during World War II. The Lakewood Victory received two battle stars for World War II service. The USS Allioth’s ports included Funafuti, Ellice Islands, Makin and Tarawa, Gilbert Islands, Kwajalein and Eniwetok, Marshall Islands and Peleliu and Angaur and Palau Islands. During this time the Allioth was under attack by enemy aircraft and suffered structural damage. The crew of the Allioth received several Metals of Honor. Fritz also sailed on the USS Boris while his previous ship was out of commission. Fritz received many honorable awards, citations, and we are ever thankful for his service to country. After the war Fritz served in the Navy Reserves during the Korean War and was discharged 1952. Fritz’s first civilian job was with Chicago, Burlington & Quincy Rail Road as a Brakeman. He then went to work as a lineman for Consumers Public Power District in Beatrice, NE. This is the job that brought him to at Rushville, NE, for Sheridan County and Pine Ridge, SD as a district manager. in 1960. Fritz left Consumers and branched out on his own as an electrician forming his company Clark Electric. Pat & Fritz remained in Rushville until 1989 when he & Pat moved back to Wymore, NE. Fritz was an active member of the Wymore Church of Christ and assisted in their expansion project. He also frequented the Wymore Golf Course until he gave that up to care for his wife. Fritz was a master fixer, there was nothing he could not make, build or fix. He took great pride in his home and his yard was immaculate. He grew and abundance of tomatoes & green peppers but did over water Pat’s flowers. After moving to the Kansas City area Fritz was reunited with his oldest sister, Gladys’, son Tom Lindstrom. Tom was a blessing, visiting Fritz and taking him golfing whenever possible. The family is very thankful for Tommy and our reconnection to family. Fritz is survived by his Son Timothy and Kathryn Clark of Kansas City, Missouri, Granddaughter Sibyl and husband Brad Schrock of Henry, IL who have 3 daughters Hunter, Braden and Harper, Grandson Ian and wife Crystal Clark of Monticello, IL who have a daughter Cloe and son Hudson. Fritz is also survived by Pat’s sister Shirley Martin from Omaha, a sister-in-law Betty Stoll of Nebraska City, NE, niece Kimberly Lincoln & family of Omaha, NE and nephew Fred Stoll & family of Lincoln, Tom Lindstrom & family of Kearney, MO, Joan Brejcha and family of Western, NE and Marge Thomas and family of Prescott, AZ . Fritz was preceded in death by his wife, Patricia Lou Clark, his parents, Fred Thomas & Clara Amelia, sisters Gladys, Doris & Maxine. Donations suggested to Wymore Church of Christ. Graveside Service, 1pm, December 18, 2017 at Wymore City Cemetery, Wymore, Nebraska. Fond memories and words of comfort may be shared at: www.CashattFamilyFuneralHome.com.

The family of Fred Charles Clark created this Life Tributes page to make it easy to share your memories.

Send flowers to the Clark family.