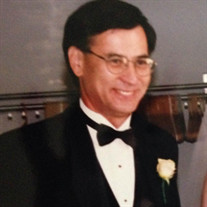 Edward Peter Fenn, 68, of Kansas City, MO Ed was a soft spoken, and tender hearted, devoted husband, father, doting grandpa, brother, uncle and friend. He was an avid reader, bicyclist, listener, and teacher. Unlike many of us, he never forgot the need for, and insisted on, annual family vacations. These are times, that still today, bring back memories of togetherness, fun, and adventure. The evidence of these travels can be found in the stacks of photo albums displayed throughout the family home. At the time of his death, Ed was enjoying his new role as being semi-retired after devoting his entire career to helping people as a Social Worker and Therapist. Ed graduated from Park College with a B.A. degree and from Kansas University with a Masters in Social Work and volunteered for Gideon’s International for over ten years. A man who was not content to sit still, Ed was actively involved in church as an Elder, a teacher and could always be counted on to help wherever there was a need. His athletic skills were shown as he participated in multiple 10K’s, a marathon, a biathlon, a triathlon, multiple MS150 bicycle rides and in 2015 he completed the 550-mile Bike Across Kansas. His travels included visiting almost all of the states, Canada, the Mediterranean, the Caribbean and Israel. On Saturday, June 18, 2016, Ed, quietly and peacefully, went home to be with the Lord. Born in Los Angeles, CA he was the son of the late Reverend Albert Fenn and the late Carol (Comstock) Fenn. Surviving is his wife of 47 years and best friend of 52 years, Rita (Youngberg) Fenn, a daughter Erin Santeusanio, husband Tyrone and their children, Ellie and Aria of Kansas City, MO; a daughter, Kristin Fenn of Houston, TX; his brother, Robert Fenn and his wife, Stella and their son, Matt of Prairie Village, KS and his sister, Patricia Fenn of West Hyattsville, MD; his sister-in-law, Kathy Fenn and his niece, Nikki of Overland Park, KS. He was preceded in death by his brother Quigg Fenn and his nephew Tim Fenn. In recent months, Ed’s health had declined with some of his favorite activities becoming impossible. Although his body was betraying him, his faith remained strong. In a final email received by many he stated “God is always good and He can always be trusted. I may be in heaven much sooner than I expected or He can cure me supernaturally. We pray for healing yet accept if God chooses to go another way”. Ed’s kindness, goodness, and caring will be missed by so many. However, we rejoice that his strength has been renewed and that he again can walk without growing weary and run, and bicycle, without becoming faint. Donations in Ed’s memory may be made to the Gideon Kansas City Northwest Camp. Visitation will be Tuesday, 6:30-8pm, June 21st with Service at 11:30am Wednesday, June 22nd, both at Tiffany Fellowship Church; 7315 NW Barry Rd, Kansas City, MO 64153. Fond memories and words of comfort may be shared at: www.CashattFamilyFuneralHome.com.

Edward Peter Fenn, 68, of Kansas City, MO Ed was a soft spoken, and tender hearted, devoted husband, father, doting grandpa, brother, uncle and friend. He was an avid reader, bicyclist, listener, and teacher. Unlike many of us, he never forgot... View Obituary & Service Information

The family of Edward Peter Fenn created this Life Tributes page to make it easy to share your memories.

Send flowers to the Fenn family.