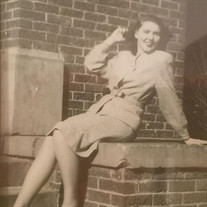 Dorothy Horton, January 17, 1928 to December 11, 2017. Dorothy Horton of Platte City Missouri passed away peacefully in her sleep during the early morning hours of December 11, 2017, just short of her 90th birthday. Dorothy was born on January 17, 1928 in Memphis Tennessee. Her mother passed away when Dorothy was two. Her father, a piano salesman, was not able to support his family, and like many children of the Great Depression, Dorothy spent her childhood with her brothers and sisters in various relative’s homes in rural Arkansas, across the Mississippi River from Memphis. As times improved, she and her siblings were reunited with their father. Upon his return from World War II, Dorothy met her future husband, Jim Horton, also from rural Arkansas. Shortly after their marriage they were blessed with their first born, a daughter they named Jan. Immediately after receiving a vaccination for whooping cough, Jan experienced grand maul seizures and as a result spent her 26 years on earth as a three year old. In her typical selfless loving way, Dorothy chose to care for Jan at home rather than warehouse her, as was the practice of the day. Moving to Kansas City around 1951, living on Troost Street, her first son Jim was born. They soon moved to what is known as the Rock House, an 1800’s landmark just east of Park University in Parkville Missouri. Becki, Casey, Cindy, and Nathan; Dorothy’s other children, came into this world over the next 10 years. At the Rock House she enjoyed raising chickens, canning produce from her large garden, and boisterous card games of Canasta with friends. She attended and supported her children’s’ many little league games and school activities. In the late 1960’s Dorothy proudly took a job as a nurse’s aide in the Cliff Manor nursing home in Riverside with her friend Mary Simpson. Her life of selfless service continued as she now cared for not only Jan but the many residents of Cliff Manor. Shortly after Jan’s death, Jim and Dorothy divorced. Although having many suitors, Dorothy never remarried. Moving from the Rock House, Dorothy worked at the K-Mart store in Platte Woods, where she enjoyed many years in customer service. She retired from K-Mart and the working world in 1990. Dorothy’s daughter Cindy chose to live with her, and Dorothy helped raise Cindy’s two children, Katherine and Elizabeth. She shared in many of their activities. They shared a warm house in Platte City overlooking the Platte River. Dorothy remained sharp during this time, working her daily cross word puzzles and other brain teasers. In the summer of 2016 it became apparent that Dorothy could no longer safely care for herself, and her family made the difficult decision to move her to the Garden Valley Healthcare assisted living center near Barry and Green Hills Roads. Her physical and mental health gradually deteriorated, but she held on to meet her fourth great grandchild Seth, born in September of this year. After visits and final goodbyes from all of her family, she passed away peacefully the morning of December 11th. She now joins Jan and Casey in heaven. Surviving her death are her children; Jim (Bonnie), Becki (Carl Brown), Cindy, and Nathan; five grandchildren; Erika (Matt Vega), Ryan, Nathaniel, Katherine, and Elizabeth (Joe Herlihy). Also surviving Dorothy are four great grandchildren; Kiraly, Talula, Jack, and Seth. A private service and celebration of her life is to be held in Parkville on Tuesday. In lieu of flowers the family suggests donation to American Cancer Society as Dorothy was a survivor of breast cancer. Her great grandson Jack, five, recently and wisely observed, “You are with God, you come here a while, then you return to God.” Dorothy has now returned to God. May she fly with angels. Fond memories and words of comfort may be shared at: www.CashattFamilyFuneralHome.com.

The family of Dorothy Horton created this Life Tributes page to make it easy to share your memories.

Send flowers to the Horton family.