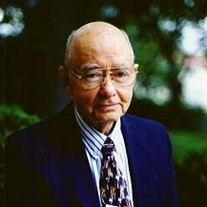 Dale M. Bryan, 94, teacher and violinist of Kansas City, Missouri, died October 26, 2018, at his son Doug’s home in North Kansas City, Missouri. Born August 7, 1924 in Kansas City, Kansas, he attended public schools there, graduating from Wyandotte High School in 1942. One of the accomplishments of which he was most proud, was being selected Concertmaster of the Kansas All-State High School Orchestra Festival at Emporia both his junior and senior years. Dale served in the Navy during World War II, graduating from Midshipman School at Columbia University in August of 1945, shortly after the Japanese surrender. The anticipated invasion of Japan then became the more prosaic, but no less rewarding, “magic carpet” duty, bringing our fighting men home from the Pacific. After attending Tactical Radar school in Hollywood, Florida, he served as a radar officer aboard the battleship USS Colorado, and the troopship USS Winged Arrow. Mr. Bryan held a Bachelor of Arts degree from the University of Kansas City, and a Master of Arts in Education from the University of Missouri at Kansas City. He taught in the public school districts of Smithville, North Kansas City, and Park Hill, the last of which he initiated a program for string instrument instruction. He left Park Hill to join the music faculty at what was then Park College. Later he was employed in various capacities at the Kansas City Public Library. Other facets of his career include being the original Concertmaster of two community orchestras: the Kansas City Civic Orchestra, and the Northland Symphony Orchestra. He was a member of the Missouri Retired Teachers Association, and a former member of the American String Teachers Association. Since his retirement, he has spent his time in private teaching, taking care of his home and grounds, and volunteering at Saint Luke’s Northland Hospital. He was preceded in death by his daughter, Denise Lorbecki, and sisters, Mildred Clay and Rose Evelyn Gilchrist. Survivors include wife, Deborah A. Bryan; children, Diana Bryan, Doug Bryan, David Bryan, Drew Bryan, and Daphne Bryan; and 8 grandchildren and 5 great grandchildren. Graveside service with full Military Honors will be 11am, Nov. 17, 2018 at Memorial Park Cemetery, 3223 N. 18th Street, KC, KS 66104. A Celebration of Life will be at noon on Nov. 24, 2018 at the American Legion Hall, 11 Main Street, Parkville, Missouri. Donations suggested to: St. Luke's North Hospital Auxillary Tree of Life at 601 S. 169 Hwy, Smithville, Missouri 64089. Fond memories and words of comfort may be shared at: www.CashattFamilyFuneralHome.com.

The family of Dale Bryan created this Life Tributes page to make it easy to share your memories.

Send flowers to the Bryan family.