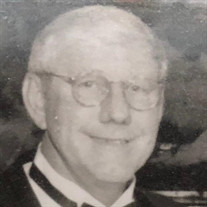 Robin “Robbie” Chester Lundy Robbins was a man of many names. And one who quickly brought smiles to all who knew him. He delighted in good natured teasing and making others feel part of something special. Born in Faucett, Missouri to Chester Vincent and Blanche Robbins, Robin was the youngest of four following his sisters Barbara Latham “Polly”, Mary Wilkinson “Wiggles” and Patsy Baber. He spent most of his childhood growing up in Platte City, a place where he knew everyone and everyone knew his name. He met the love of his life, Carol Sue Norman at the University of Central Missouri, and the two were married for over fifty-four years. Robin survived a near fatal car accident in high school which laid him up in a hospital for months and handled it with the good humor he would be famous for his whole life. Everyone knew Robbie and his friends Cecil, Rudy, Wade, Roger, and Roller as a prankster who found a way to lock out the whole school and to put a classmate’s car on top of the school’s roof. He also loved making jokes with waitresses in just about every restaurant he ate at, and was known to walk into a Baskin & Robbins, flash his driver’s license and tell folks with a smile they better be nice to him because he owned the place. Jokes aside, Robbie was a man of service and the community both formally as the Deacon at the Park Hill Christian Church and the coach for his son Norman’s soccer teams, but also a person who neighbors knew they would call if they needed anything fixed or even a boat to help bail them out during a flood. He worked at TWA for over thirty years, as a parts buyer and then at divisions of the company at Worldspan and the Pars Aviation System. He later segued to a career managing buildings for Cohen Esrey, including the 11500 Ambassador Street known as the KC AC building where reservations were made worldwide at this facility for Trans World Airlines. In addition to those jobs, he followed in his father's footsteps and ran Robbins Electric, adopting his father slogan “We fix anything electric.” They sold and repaired appliances and televisions and air conditioning , at this time it was “new technology.” The business continues with his son Norm who runs it now as Northland Norm “One call does it all.” Most of all, Robin was a family man. His father-in-law Ray Norman would tell Robin to drive carefully because he had two million dollars in his back seat, his daughter Natalie and son Norm. He was a devoted father who never missed a game of his kids, but also taught them self-reliance. He built his own house on Weatherby Lake brick by brick, handing Natalie and Norm a hammer and nails while still in elementary and having them help build their own rooms. He also disassembled a Volkswagen bug on the front lawn and told Natalie she could drive the car as soon as she rebuilt it. Robin was a great collector of vehicles which he worked on in his backyard including a trailer which he used to take his wife, son, daughter, son-in law, and granddaughter Campbell Kurlander across country enough times to earn Campbell a vest full of Junior Ranger badges from most of the national parks. Wherever he went, including a Saturday morning breakfast club he attended for over 30 years, Robbie brought with him a sense of basic decency, good-heartedness, and fun. Robin passed away on December 21, 2017 surrounded by loves ones. He is survived by wife Carol, daughter Natalie (Kurlander), son Norman, son-in-law Carl (Kurlander) and granddaughter Campbell as well as sister-in-law Dee Otten, and sisters Patsy Baber and Mary Wilkinson and multiple nieces and nephews. He will be missed by many and remembered by those knew him, always.

Robin &#8220;Robbie&#8221; Chester Lundy Robbins was a man of many names. And one who quickly brought smiles to all who knew him. He delighted in good natured teasing and making others feel part of something special. Born in Faucett,... View Obituary & Service Information

The family of Chester L. Robbins created this Life Tributes page to make it easy to share your memories.

Robin “Robbie” Chester Lundy Robbins was a man of many names....

Send flowers to the Robbins family.