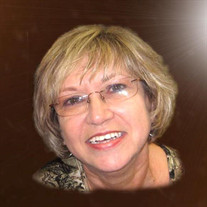 Carol Jean Littrell (Graves), 74, went to be with our Lord and Savior Jesus Christ on August 29, 2017. Carol was proceeded in death by her father Charlie, mother Nellie Littrell and brother Bud Littrell. Carol was born June 3, 1943 in Steele City, Nebraska and graduated from Kinsley High School in Kinsley, Kansas in 1961. Her pride and joy was her family. She leaves behind her daughter Deb (Tim) Breitigan of Valley Center, Kansas. and son Jeff (Patti) Shank of Swissvale, Colorado. Known as GMizzle (because "she was too cool to be called grandma”) and Grandma to others she loved. She leaves eight grandchildren, Josh, Megan (Conrad), Mindy (Jake), Brent (Whitney), Jacob (Stephanie), Molly, Seth (Claire) and Caleb and 8 great grandchildren, Lilly, Dalton, Jadan, Carson, Tucker, Timmy, Ethan, Taron and a new arrival due in February to continue her legacy of love and kindness. To her delight she became GMizzle or Mizzle to many loved ones including Lee's grown children and grandchildren. Carol was a long time employee of Valley Center High School in Valley Center, Kansas as secretary to the Vice Principal and was a retiree from Sedgwick County Election Commission. In 2008 she reconnected with her childhood classmate, Lee Schroeter who ultimately was the love of her life. In 2009 she bought her dream home in San Tan Valley, Arizona. Carol and Lee spent several years traveling and just enjoying spending time together in Arizona for the winters or the summers in Kansas. One of her favorite pastimes was maintaining her connections with her classmates over the years attending many class reunions. Carol was a strong supporter of the military and their families. She would note with pride that she had three grandsons who volunteered to put their lives on the line to serve their country. She used her artistic talents to bring joy to many through pen and ink drawings, water colors and ornate quilts she produced to mark births and special events in their lives. She loved to cook, and do variety of canning and making homemade jellies. She simply loved making people smile. In 2003 Carol was infected with a virus that attacked her heart which left her with beginnings of congestive heart failure. In 2011 she had her first open heart surgery to try and correct a valve issue. In 2013 she was offered a chance to extend her life and she agreed to receive her 1st LVAD (Left Ventricular Assist Device). In December 2015 and January 2017 she had open heart surgery to replace the LVADs. Even through all her tremendously challenging surgeries, Carol never lost her will to fight for every day to be better than the last. To say the least she was an inspiration and example with her will, strength, happiness and faith in her Lord. Carol was one of the biggest prayer warriors of all. They say God only gives us the challenges he knows we can handle. Carol met each challenge with a smile and the hope that tomorrow all challenges will be lifted and the world will be a place where all people will live peace, harmony and love. There will be a memorial to celebrate the life of Carol on September 30 at 10:30 at Aldersgate United Methodist Church, 7901 West 21st Street North in Wichita, Kansas. The children of Carol strongly request that anyone who may attend the memorial dress as she did in bright colors and NO black. Condolences may also be left at legacy.com or cashattfamilyfuneralhome.com/obituaries. In lieu of flowers contributions in her name may be directed to: The American Heart Association at donatenow.heart.org or For Support for Wounded Warriors and Their Families at fisherhouse.org

Carol Jean Littrell (Graves), 74, went to be with our Lord and Savior Jesus Christ on August 29, 2017. Carol was proceeded in death by her father Charlie, mother Nellie Littrell and brother Bud Littrell. Carol was born June 3, 1943 in Steele... View Obituary & Service Information

The family of Carol Jean Graves created this Life Tributes page to make it easy to share your memories.

Send flowers to the Graves family.