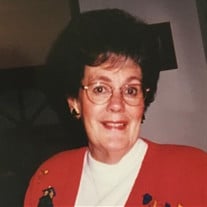 Carma Irene Cheek DeArman was born March 26th, 1937 and died August 14, 2017. Parents John Henry Cheek and Carma Jane Hooten Cheek, as well as her only sibling, Robert Cheek, preceded her in death. She is survived by her three daughters, Krynn Lukacs (Alex) of Ashland, OR; Karin DeGroot (Randy) of Atlanta, GA and Kristi Winegarner (Curt) of Kansas City, MO; and by her 7 grandchildren. Irene began her career as a first grade teacher in 1968 in Dexter, MO. She moved to Kansas City in 1974 where she continued teaching and later was Principal of Southeast and Union Chapel Elementary Schools in Park Hill, and of Alexander Doniphan Elementary in Liberty, MO. She finished her career in education as the Director of Curriculum for Liberty Public Schools and retired in 1997. An accomplished musician, Irene played the piano, organ and accordion. She loved to sing and was a member of the Platt Woods United Methodist Church Choir. She was a superb cook, an avid reader and sports enthusiast for her home teams. But her greatest joy came from being a mom and grandma, and in these roles she was at her best. She relished her time with her grandchildren and always made them feel very special. She read to them, sang to them, built snowmen and baked cookies with them. She played endless games and took them to the park. She showed up for their activities and important events in life, letting them know it was important to her. She corrected their grammar and gave out plenty of hugs and kisses. She was beloved by all 7 of her grandchildren. She spent her entire life spreading love and knowledge to everyone she met. She will be greatly missed. Visitation will take place at Platt Woods Untied Methodist Church on Sunday, August 27th from 2:30 to 4:00 pm. Donations in her memory can be made to: Canine Assistance Rehabilitation Education and Services (CARES, Inc). P.O. Box 314 Concordia, KS 66901 1-800-498-1077 email: [email protected] website: caresks.com Or: Crossroads Hospice (put Irene's name in "memo" line) 14310 #. 42nd St. South Suite 600 Independence, MO 64055 816-333-9200 Fond memories and words of comfort may be shared at: www.CashattFamilyFuneralHome.com.

The family of Carma Irene DeArman created this Life Tributes page to make it easy to share your memories.

Send flowers to the DeArman family.